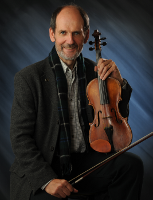 Douglas Lawrence hails from Buckie, Banffshire where he first started playing the violin at school aged nine. After a few years he showed an interest in Traditional Scottish Fiddle Music and was fortunate to receive tuition from Hector MacAndrew whose family had direct links to the Gows via James Mackintosh of Dunkeld.

After four years of study and gaining a performer's diploma at RSAMD, now "The Royal Conservatoire of Scotland",  Douglas went on to play with the Scottish National Orchestra for twenty years, on one occasion playing a duet with Yehudi Menuhin, and toured all over Europe and America, making countless recordings in the process.

Nowadays he spends a lot of time helping to pass on the invaluable techniques passed on from MacAndrew to his own pupils, many of whom have won acclaim at the highest level. As well as winning all the major competitions for for playing, most notably The International Clan Gathering in 1977, and composing, he has adjudicated at the Glenfiddich, Musselburgh, Elgin, Kirriemuir and Banchory festivals.

More recently Douglas has given workshops, master-classes and been teaching at fiddle camps in the USA and New Zealand and in 2011 recorded his second CD, "The Farewell".

This site uses cookies to give you a better user experience.